The Incredible True(ish) Story of Jumanji, as Told by a Rhino 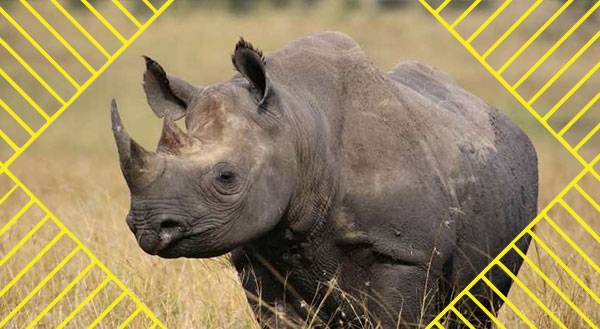 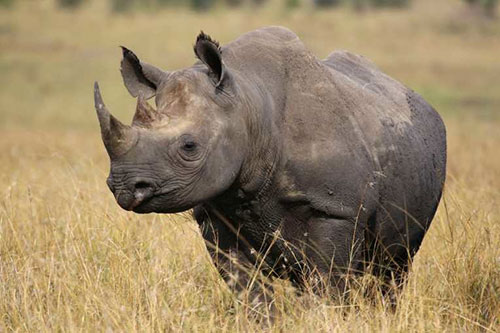 Clarence had always been a bigger guy. His mother had always reassured him that the men in his family were simply bigger-boned, huskier specimens. Sure, his eating habits could have been healthier, but it was hard to commit to a strict regimen. The other rhinos were nice enough, but whenever he fell behind the herd he could hear their whispered comments, their stifled laughter.

Clarence may have had a thick skin, but that was only literal. Had he known about the body positivity movement, perhaps his tortured youth would've been different. Sadly the jungle was too remote, and it was light years away from self-care anyways.

Clarence remembered the day it all changed for him. He was grazing in a field, taking a moment to enjoy the fleeting shade cast by a lone cloud that hung in the sky when he saw her. Sally Rhino was looking at him. Their eyes met, and she smiled.

He was a goner. 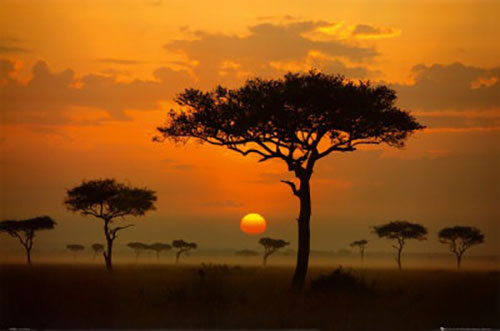 Clarence woke up with the sun the next morning and chased it across the horizon. He was going to learn to run if it killed him, damn it! He wouldn't be Slow Clarence forever. He was going to be a contender! He had the eye of the tiger!

This was not literal. Clarence certainly knew tigers, and his heavy-lidded stare was a far cry from the menacing glare of his big cat friends. He was, however, a big fan of Rocky III, as well as the original Rocky and Rocky II, although by Rocky V, he was kinda over the whole thing.

Nobody could blame him.

Weeks went by. He could feel his body growing stronger, his legs strengthening, his lungs reaching their greater capacity. The other rhinos were noticing. Sally was noticing.

"Looking nice, Clarence!" She shouted once. He thought he might die then and there.

One morning, he found himself pushing particularly hard. He wanted to beat his lowest time for a mile-long sprint, and he felt that truly this was the day!

Until everything began to get... weird.

"Oh, no ..." This shit again?! When were they going to STOP PLAYING THE DAMN BOARDGA— 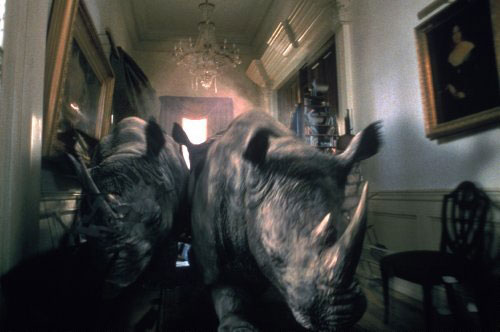 WHOMPH. Gone were the reassuring sights of the African planes. Disappeared were the familiar smells of home.

Clarence was back in some hellish concrete nightmare, staring at the asses of all of his friends. They were running.

Of course it's a stampede, he thought to himself, already breathless from his earlier sprint. This was his time to shine, to prove himself, but NO. Fate and time had worked against him.

He could feel himself lagging behind, watching as the other rhinos plowed ahead, destroying everything in their wake. Clarence wanted to yell, "I can go just as fast as you can! I'm just so tired!" But he knew they wouldn't believe him.

He felt his run slow to a lumbering walk, his lungs near to bursting from pain. His eyes closed; he couldn't bear to see the herd shrink more and more in size. Every step forward felt like the air was being forced from him. He felt a shame well up inside of him, the icy claw of defeat reaching towards him.

And then, he felt a nudge. His eyes opened as he lumbered forward, head tilting to the side.

"You can do it, Clarence! I believe in you!"

He puffed out a series of short breaths, before increasing his speed. He could be part of this herd! He could cause just as much damage as the best of them – with Sally by his side, he could do anything!

And so, they ran together. Talking, laughing, and stomping cars with reckless abandon. He admitted how much he had been working out to impress her. She admitted watching from a distance, hidden in the shade of a Baobab tree.

He felt, for certain, that he had died and gone to the Great Plains in the sky. Could something like this happen to him, Slow Clarence?

Before he could even muster a contented sigh, the hideous beast known as fate raised her ugly head and snatched his joy out from under him.

He felt his feet lift off of the ground, and knew his moment in the sun was gone. Jumanji had been called. The game was finished. Soon he and the rest of his herd were flying backwards in a cacophonous roar, heading back home. For a fleeting moment he wished they could stay there forever, he and Sally, maybe live in a nice zoo in San Diego. His vision blurred, darkness came, and he heard himself whisper, "Goodbye, Sally."

When he opened his eyes, he was once again standing in the expanse of nature, watching as the sun below the earth. It might as well have been a dream.

He turned, eyes wide, to see Sally moving towards him. She was smiling.

Jumanji, his heart cried out, for he had surely won. 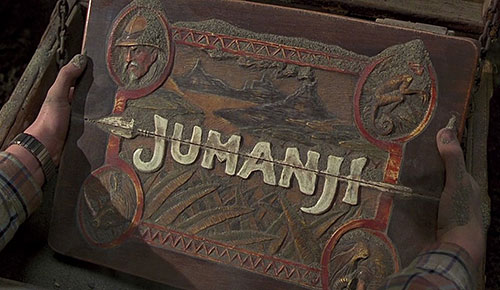