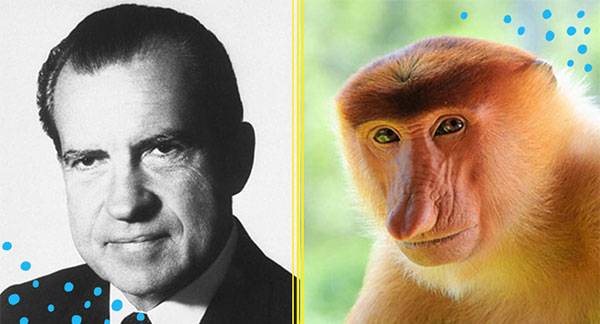 In honor of Presidents Day, here’s a list of some of animal doppelgangers to our favorite (and not so favorite) US presidents.

Starting off our list is the brown bear, a dead ringer for a young Bill Clinton. To be fair to Clinton, every guy in the ‘70s kinda looked like a bear. But to be fair to brown bears, their serial monogamy would probably help them avoid any Clinton-esque scandals. 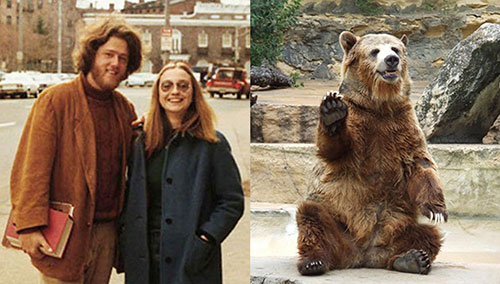 Comparing politicians to primates is a time-honored activity for the American people. But in terms of looks alone, Gerald Ford takes the cake as the most great ape-like of our leaders. With his football and military background (and his prominent brow), it’s easy to see how he evokes the presence of an Alpha gorilla. 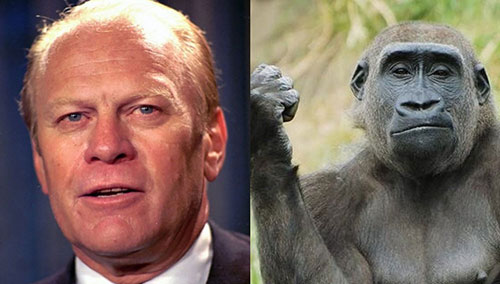 This is not Photoshop. Believe it or not, the picture on the left isn’t actually Richard Nixon, but the proboscis monkey (or long-nosed monkey). The proboscis lives on a diet of fruits and leaves but, like Nixon, will occasionally dabble with bugs. 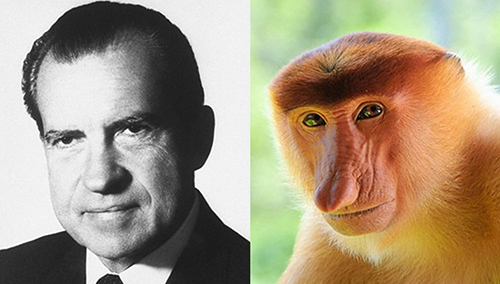 The Internet has crowned the deep-sea blobfish as the Ugliest Creature on the Planet. That’s so mean! The poor thing lives so far down in the ocean that it doesn’t know that light exists, let alone make-up. We propose that we rechristen the blobfish with a nicer title. Perhaps go from ugliest to LBJ-iest? After all, the two do share the same signature pout. 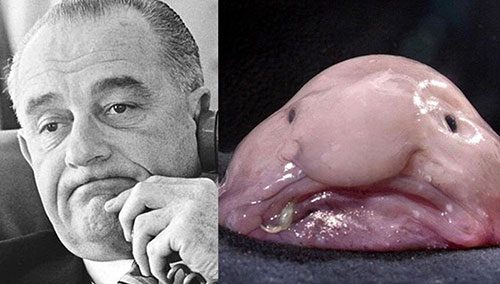 America went through a whole period where the main qualification for becoming president was a sweet set of whiskers. One of the most notable mustachioed presidents was William Howard Taft. He’s also known as the president so large that he got stuck in his bathtub, making him the perfect candidate for “Fat Cat of the White House.” Sorry Garfield. 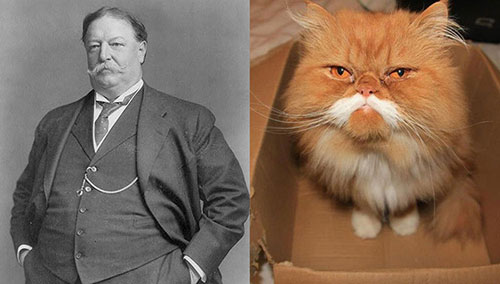 6. Teddy is the Walrus 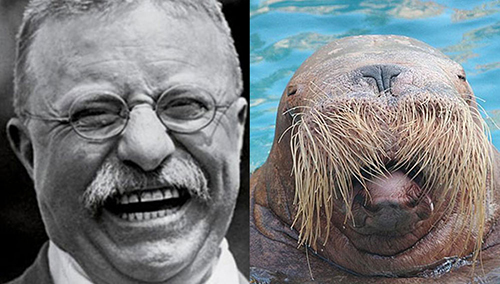 Move out of the way, Fat Cat Taft. While you might be fat and whiskered, you’re hardly a perfect look-a-like to America’s greatest mustachioed president: Theodore Roosevelt. That honor indisputably belongs to the majestic walrus. Look at this pair! Can you say manly, weather-resistant, twinsies?

Chester A. Arthur was a bit of an awkward president. Besides falling into his presidency after Garfield’s assassination, the man is known for little to nothing—until now! Let us introduce Chester A. Arthur: the president who will be remembered as the guy whose wispy beard and chubby cheeks make him look like a gopher. 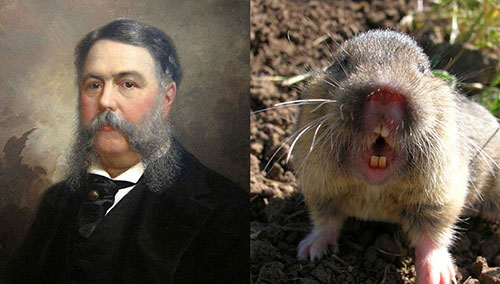 With its gruff beard, big dopey ears, and face only a mother could love, the goat makes for a perfect Abe Lincoln body double. 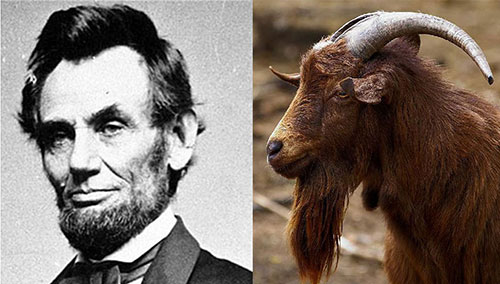 Here we see President Buchanan mimicking the sexy plumage of the cockatoo. Why you might ask? Because Buchanan—the only bachelor president in US history—apparently needed all the help with the ladies that he could get. His sexy boy-band puff might have worked, too, if his personality wasn’t so cold—he allegedly drove his fiancée to suicide. 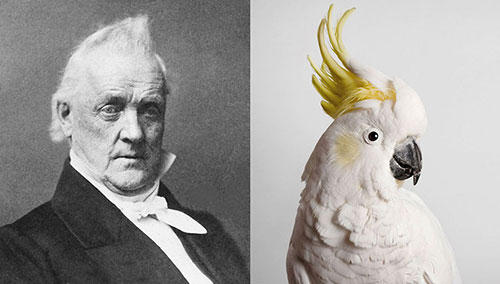 Little is known about the shy, desert-dwelling Sand Cat, except for the fact that it shares a hair stylist with eighth president Martin Van Buren. 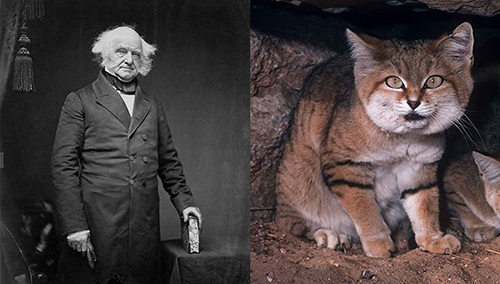 11. John Quincy Adams: The Horned Frog of the White House

“Slimy” has long been used as an adjective for politicians, but no one deserved it more than John Quincy Adams, who was an obvious doppelganger for the Amazon Horned Frog. Both also have fun nicknames, with the frog being dubbed the “Pac Man frog” due to its appetite, and Adams being called a “do-nothing president” by his peers. Okay maybe that last nickname isn’t so fun. 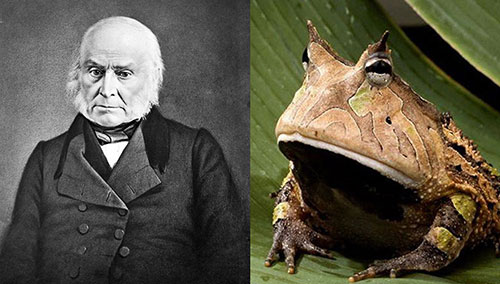 We’re pretty sure the African Buffalo has a hard time being taken seriously when its horns make it look like it’s wearing an old-timey wig. The joke’s on us though, because once African Buffaloes achieve the technology required for time travel, they’re going straight back to 1789 to “replace” James Madison and rewrite the Bill of Rights. I hope you like mooing, because that’s our new national anthem! 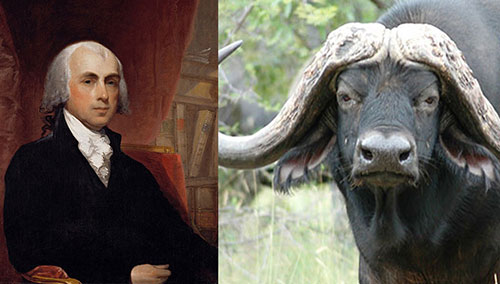 Last but not least, we have George Washingduck, or as scientists prefer to call it, the “white crested duck.” (Actually, they call them Lophonetta specularioides, but that’s a bit pretentious.) Due to a genetic mutation of the skull, these ducks have developed Washington’s signature curls.  Maybe their next mutation will give them cherry tree-chopping powers. 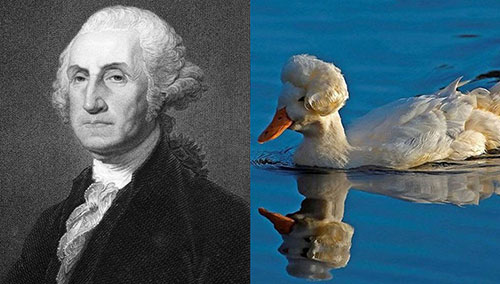 If this list proves anything, it’s that you never know whether that powerful-looking guy stepping off Air Force One is the President himself, or just an animal doppelganger. But if you see “Obama” eating from a trough on the South Lawn of the White House, chances are the real one’s already vacationing in Hawaii.