11 Disney Animal Sidekicks Who Deserve Their Own Movies

by Pet Freak
May 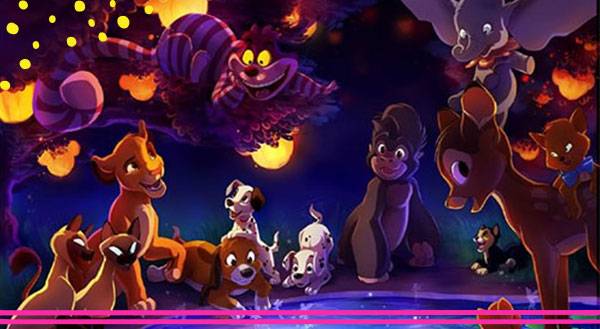 Without their wisecracking animal sidekicks, most Disney heroes are just totally bland. Sure, they get to fight dragons and fall in love, but it's the animals that have the fun and capture our hearts.

Here are 11 Disney animal sidekicks we'd like to see in the spotlight, and we have just the projects for them:

1. The Cheshire Cat from Alice in Wonderland:

Sure, this Technicolor cat is creepy with his crescent moon smile, but when it comes to helping Alice, he's basically her only friend in Wonderland. We'd love to see the Cheshire Cat star in his very own psychedelic cult classic.

2. Mushu and Lucky Cricket from Mulan:

With Mushu, Eddie Murphy was able to show the world that when it comes to voicing opinionated animal sidekicks, he's the king. Lucky Cricket might be the cutest insect we've ever seen! These two would totally kill it in their own animated buddy cop comedy.

3. Djali from The Hunchback of Notre Dame:

Djali is the PERFECT sidekick. Djali bleats whenever trouble is near, head butts Esmerelda's enemies, and knows how to smoke a pipe! For Djali's starring turn, we'd like to see him in a cooking show eating his way through Paris.

Meeko is the cutest and cuddliest raccoon in the North American forest. He's also the perfect foil to Percy, the persnickety pug. Meeko would be the perfect host of his own forest prank show alongside Flit, the hummingbird.

Any chameleon who would stick their tongue into a stranger's ear without question is a good friend. He's also Rapunzel's only friend. Pascal could star in a new super-hero flick—his super power? Disguise!

Sven has been with Kristoff from day one, helping him to lug ice, sing songs, and save queens. At heart, he's basically just a giant dog. If Sven were to star in his own film, we think it would be a whole lot cuter than Frozen 2.

This cheeky chimp is totally okay with living the "street rat" life with Aladdin. He's sneaky and full of fun, making him the perfect partner in crime! While he's not as verbose as Iago, the talking parrot, he's a whole lot sweeter. Abu would be perfect in a crime drama as the thief we can't help but love.

8. Scuttle from The Little Mermaid:

Under the sea it might be all about Sebastian and Flounder, but on land (or in the air) Scuttle is the only creature with a sense of humor. For Scuttle's star turn, we think he'd shine in a Louie-type cable show.

Of course, Cruella Deville wanted to get her hands on those puppies, they're the cutest things alive! Obviously, this brood would have their very own reality show, a la the Duggars on TLC.

10. Gus and Jac from Cinderella:

Jac and Gus are a classic comedy duo that could rival greats like Abbot and Costello... or David Spade and Chris Farley? They'd be best suited for a buddy road trip movie, where all sorts of madcap adventures and hijinks ensue.

11. Timon and Pumbaa from The Lion King:

Timon and Pumbaa, our favorite meerkat and warthog, have already had star turns in their own animated series. Thank goodness, their genius has been recognized. Hakuna Matata!

Even though we've narrowed down this list to our top 11 animal sidekicks, there are still dozens more in the Disney vault. Isn't it nice that they give us cute and funny animals to stare at while those boring princesses are on screen?