Jokes Are For Pets, Too: 7 Pet-tastic SNL Sketches 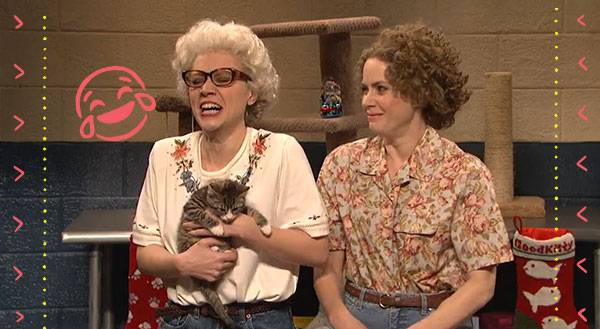 Letterman might have had his stupid pet tricks, but the granddaddy of all late night humor, Saturday Night Live, has had many hilarious pet-centric sketches. Here are seven of our favorites:

We all know Dr. Doolittle could talk to animals, but what else did he do? Did he produce Entourage? Star in the Perfect Storm? And does he ever tell you to say hi to your mother for him? Didn't think so.

A cat is friend you didn't know you needed... an itch that scratches you... a cup of love, a dash of whiskers, and a metric yard of fur. Join the fun in this Spring Cat-a-bration featuring some adorable pussies, plus cat ladies extraordinaire Barbara DeDrew (Kate McKinnon) and her frisky sidekick Purrsula (Reese Witherspoon).

You love your dog and you cherish every moment you have with him – but when it comes to mealtime, hell, you've got bills to pay. Haven't you ever seen your dog eat cat poop? He looked like he was having fun then – so won't he love Mostly Garbage Dog Food now?

In the future, there was a nuclear war, and because of the radiation, cats developed the ability to shoot lasers out of their mouths. Some use the cats for good – others for evil. Question is: Who will win in a war of LASER CATS?

Steve Martin was amazed when he found out his cat Toonces could drive. Just don't give him a driving test.

In a very surreal parody of an Animal Planet programs, "Dog Show," introduces us to Miss Colleen (Molly Shannon) and Mr. David Larry (Will Ferrell), a married couple and their dogs, Mr. Rocky Balboa and Mr. Bojangles, who attempt a séance It's all freaky, but as long as you remember Mr. Bojangles is a girl, then everything makes sense. NOT.

Family Flix presents, Rocket Dog, written and directed by Percy T. Douglas (Tracy Morgan). While the movie sounds "doggone terrific," it wasn't all that for the unlucky dogs that scored a starring role. Or the humans, either. At least they're all immortalized in moving montages and the poignant statement, "Houston, we have a dog!"

Since SNL is one of the longest running shows on television at 40 years, which would be 280 in dog years, we're sure in the years to come they'll bring us even more pet sketches that tickle the funny bone.