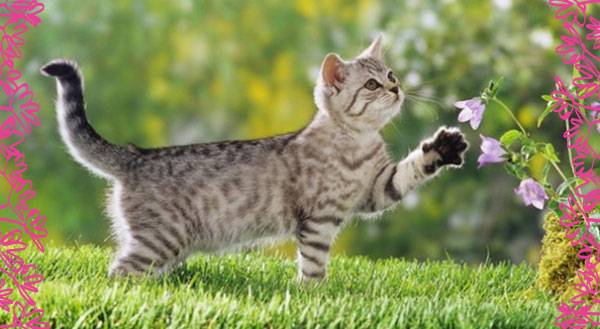 As much as we love our pets, having an indoor/outdoor cat is flat-out maddening. You don't own an indoor/outdoor cat; your cat owns you. Sure you can try locking your doors, but we can promise you that your kitty won't stop scratching windows, pulling up carpets, and meowing in your face until he gets his way. 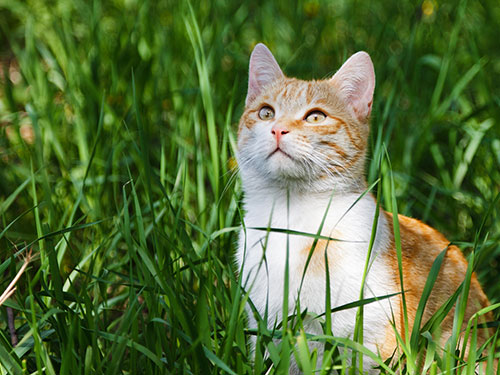 For those who don't quite understand, we've come up with a few reasons why having an indoor/outdoor cat is guaranteed to make you feel like you're chasing your own tail, day in and day out.

1. He Always Wants to Be Where He Isn't 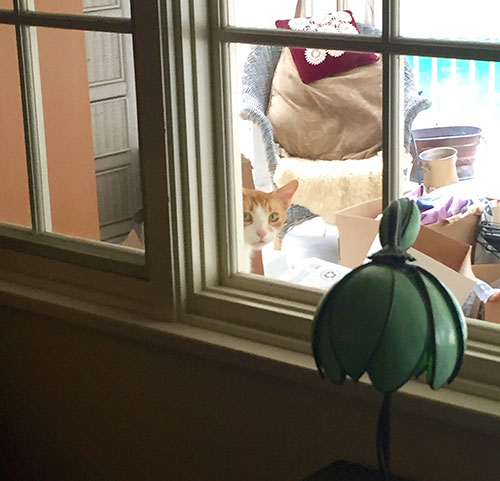 Cats live by the saying, "the grass is greener on the other side." The whole point is to be frolicking in the grass or tearing up the carpet as if it were grass, and preferably both within a five-minute span. He'll meow until you give in and let him out, and almost immediately, he'll put his sad little face in the window, perplexed as to how you could possibly be so cold. 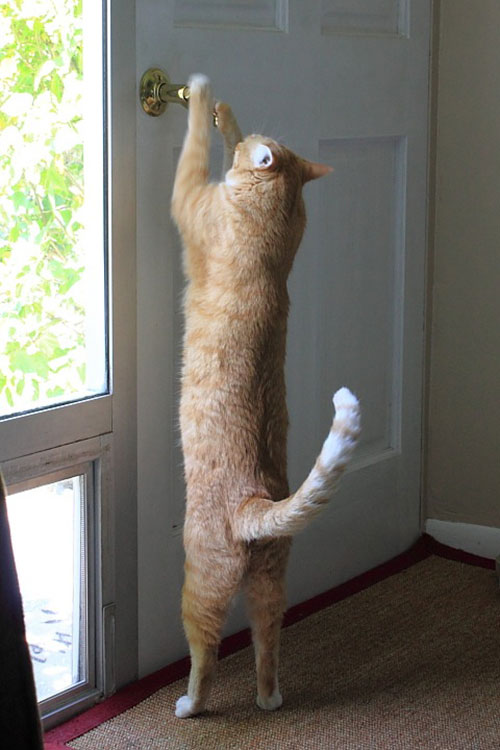 You think just closing the door is enough to keep the cat out of your room? Think again. Give her five minutes, and she'll be on her hind legs turning the doorknob with her paws. They say imitation is the sincerest form of flattery, but this is just flat out irritating.

3. She Never Wants to Cuddle When You Want to Cuddle 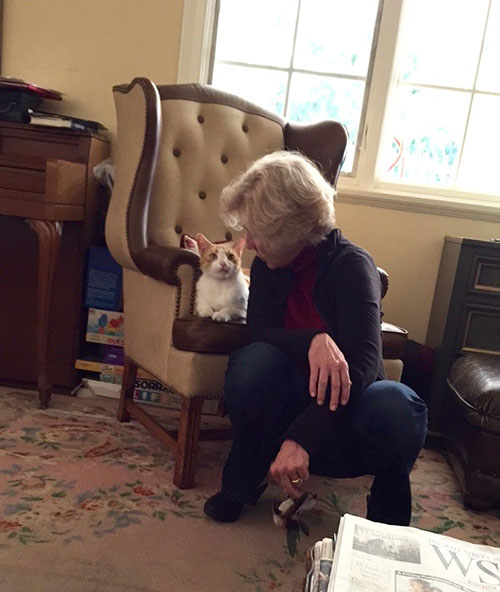 You come home from a long day at work, and all you want to do is watch TV on the couch with your cat by your side. When you walk in the door, she is either nowhere to be found or she won't let you come near her. You relax on your own for a while, and then get up to do a few things on your computer. Suddenly she's on your lap, on your keyboard, rubbing her face on you and/or the screen, and there's nothing you can do.

4. He Brings Mice in the House 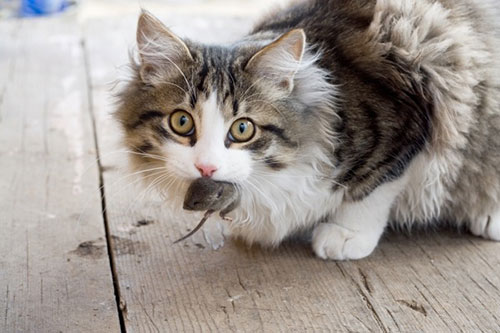 Being outside, your cat has learned to feed himself. What he hasn't learned is just because he can come inside doesn't mean his meal can come with him.

5. You're Always Afraid a Bigger Animal Will Eat Her 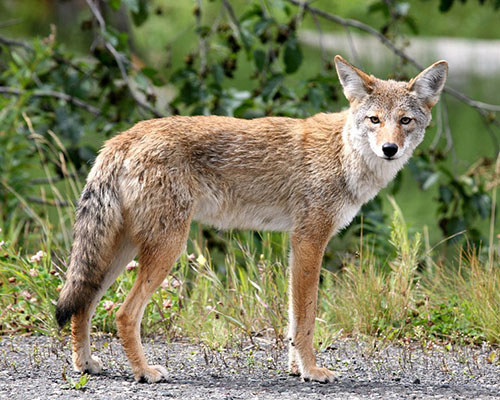 Depending where you live, you may have coyotes, mountain lions, vultures, or any other larger, fiercer beast for that matter. And although you know you have one scrappy cat, the truth is that if a day goes by without seeing him you start to worry that your kitty has become scraps for someone else's dinner, <<>>.

6. He Takes Up All the Room When He Sleeps 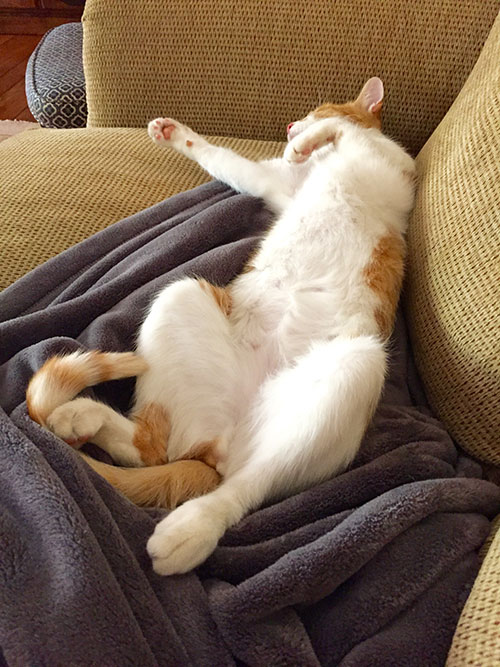 When he's outside he doesn't need to share sleeping space with anyone else, so why would he do it in the house? It's amazing how something 1/10th of your size can take up half the couch.

7. You're Afraid She'll Find a Better House to Live In 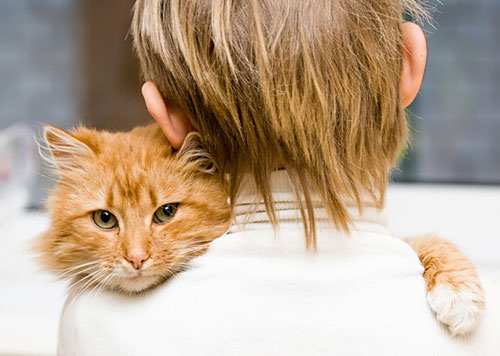 Admit it, you can't keep her hostage. She found you, didn't she? There's nothing stopping her from finding someone else. 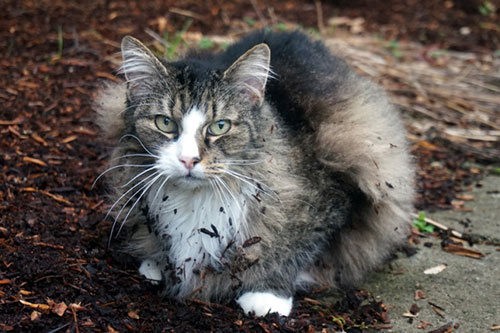 "But I was only outside for 10 minutes!"

Doesn't matter. In those 10 minutes he did more things than you probably do in your entire day, and has the filth of a life well lived to prove it.

9. She Loves to Hide 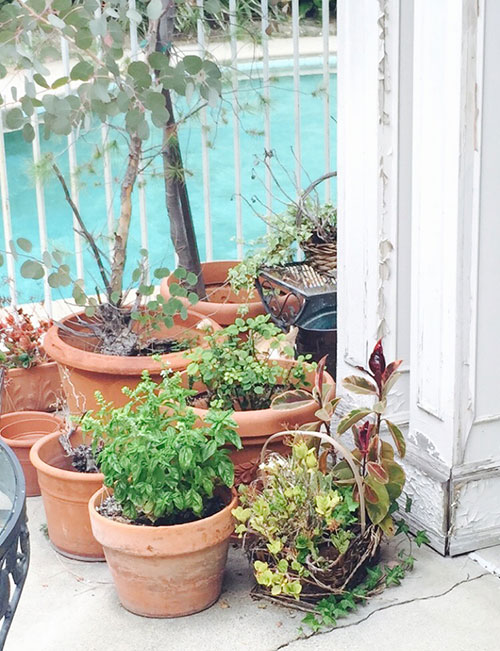 She can get herself into the tiniest crevices of your home that you never knew existed. Even if she's hiding right in front of you, you won't see her... and probably are standing a foot away, screaming for her from your front stoop, making a damn fool of yourself. 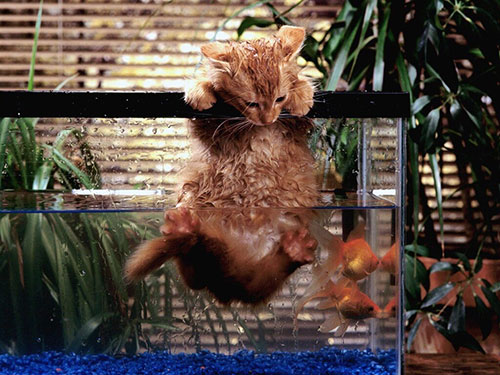 Is your cat on the kitchen counter? Go ahead, bang on the table and yell "bad cat!" as many times as you want, but he's not going anywhere. "No" isn't an outdoor thing so it won't be an indoor thing either.

When she's outside she can't afford to be trusting. There are animals bigger than her everywhere and her first instinct is to run. This doesn't stop just because she's indoors. Take, for example, when you have a friend over that you want to introduce your kitty to, and she is either nowhere to be found or, if you look under enough beds, lodged deep in the furthest back corner like a solider tucked away in a protective bunker. Of course as soon as your friend leaves, your cat will miraculously appear by her dinner bowl, demanding retribution for bringing an enemy into her territory.

There's only one way to love an indoor/outdoor cat: embrace the fact that she's a little bit wild, and accept her for who she is. This is the strategy Brad Pitt employed with Angelina Jolie, and it's still working great for him!